All important events of Malaga

Spain has a lot of festivities and holidays throughout the year, here we have surmised some of the most important dates in the Malaga and Spanish calendar:

5-6th January – Three Kings Day - In Spain, this is an important date for Spanish children on the night of the 5th The ‘Three Kings’ parade the streets of the towns on floats who throw streets into the crowd.

Most children receive presents from the ‘Three Kings’ on the night of the 5th and the morning of the 6th if they have been good throughout the past year, but they receive ‘carbon’ (a sweet in the shape of charcoal) if they have misbehaved.

From the 23rd February – Around this time of the year, towns all over Spain celebrate their annual carnivals with fancy dresses competitions and parades throughout the streets.

The most famous carnival in Spain is held in Cadiz.

28th February - Day of Andalucia. On this day, it is a state holiday in the whole of Andalucia; it is traditional on this day to eat bread with olive oil and many towns hold activities to commemorate the state of Andalucia. 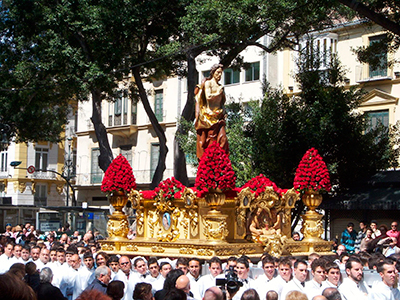 Easter Week – ‘Semana Santa’ is an important date in the catholic calendar in Spain, the week is filled with all different types of processions and church masses. Parades are held every day of this week where the church brotherhoods carry heavy religious figures on their shoulders. Malaga is recognised as one of the best places to see these processions, so why not rent a car from Malaga Airport to get to the different events.

1st May – Labor or Workers day. This day which is recognised throughout the world is a national holiday throughout the whole of Spain; it remembers the day that the modern workers movement was formed.

3rd May - Cruces de Mayo. Even though this day is not a holiday in Malaga, the day is celebrated (mainly in the Granada area) with competitions which are held to decorate crosses with flowers. We recommend you hire a car at Malaga airport to visit the different towns which hold celebrate this event.

18th June - Corpus Christi. This day is an important day in the catholic religious which celebrated with processions in the centre of Malaga, however this is not a national holiday.

23rd June - San Juan. (Saint John’s day) On the longest day of the year, Spain celebrates with parties and bonfires on the beach.

It is a tradition in the Malaga area to go in the sea at midnight (even if it means just putting your feet in the sea).

The parties carry on throughout most of the night.

Fishermen in the area recognise the figure as their ‘protector’ the image is also known as ‘The star of the seas’ (Stella Maris). 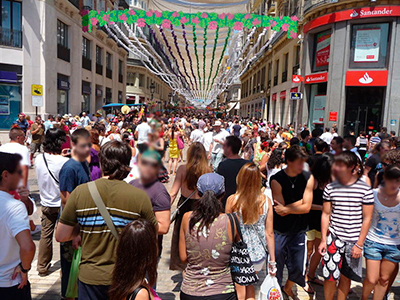 This fair is usually lasts a week, with a daytime fair in the centre of Malaga and a bigger fair with fairground attractions held at the large fairground on the outskirts of Malaga.

There are usually concerts; horse parades as well as other events, Spanish women usually wear traditional flamenco dresses to attend the fair.

We recommend Renting a car from Malaga airport as the best way to attend this event.

15th August - Asunción de la Virgen. This date is a national holiday in Spain as it celebrates one of the patrons of Spain.

19th of August – This is a local holiday in Malaga Province, which honours the patrons: San Cririaco y Santa Paula.

8th September - Virgen de la Victoria. A local holiday in the Malaga area, in honour of the cities patron.

Usually there are official parades on this day.

1st November – All saints day. Spain celebrates this by traditionally honour and remembers people who have died.

This is a national holiday in Spain.

6th December – Constitution Day - Spain remembers the day the Constitution was signed in 1978. This is a National holiday; however it is only celebrated with official events.

25th December - Christmas day. Some children and families in Spain celebrate Christmas with presents from ‘Santa’ on Christmas Day, however the day most children receive their presents on the night of the 5th January for ‘Three Kings Day’.

28th December - Los Santos Inocentes. (Innocent Saints Day) This is equivalent of the English April fool’s day in Spain, it is a day where people do pranks on each other or make jokes.

It is also celebrated with other festivities including Flamenco dancing.