A guide of things to do in Benalmadena 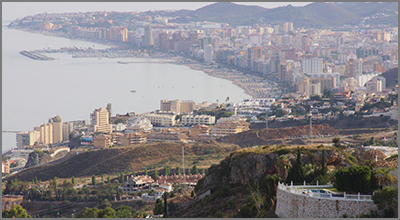 Benalmadena is a tourist destination in the province of Malaga located which between the towns Torremolinos and Fuengirola.

The town is divided into three different areas which are the following: Benalmadena Pueblo (which is located in the mountains), Benalmadena Costa and Arroyo de la Miel (which are both situated more on the coast).

Throughout the town you will see influences all different types of influences from when Phoenicians, Carthaginian, Roman, Visigoth and Arabic settled in the area.

Benalmadena is a major tourist attraction where people are attracted from all over the world for its beaches and one of the best marinas in Malaga and Spain.

There is also an important nightlife in the area which is mainly in the areas of Puerto Marina and Plaza Solymar.

To discover and explore Benalmadena why not hire a car from Malaga airport.

Monuments around the area of Benalmadena

The Bil-Bil Castle is situated on the beach front of Benalmadena and was built in 1927.

The building nowadays is used as a culture centre for art exhibitions and is also used as a wedding venue.

This castle started to be built in 1987 and was finished seven years later.

It was designed and built by Dr. D. Esteban Martin Martin who wanted to make the structure to celebrate the life of Christopher Colombus together with the discovery of America.

It is the biggest monument dedicated to the life of Christopher Colombus at 1500 m2.

The Casa de la Cultura is located in the Arroyo de la Miel part of Benalmadena, it is located near the train station.

Throughout the year culture events and art exbitihions are held at the building.

Benalmadena Town Hall have some of their municipal offices in this building.

Things to do and see in Benalmadena

Tivoli World is one of the oldest theme parks on the Costa del Sol which first opened in 1972.

The park has a wide range of attractions like a ferris wheel, a free-fall of 60 metres or a house of terror.

*Visit the Tivoli World website to find out more information about the opening times and entrance fees.

The Cable Car in Benalmadena offer you a different view of Benalmadena, and the surrounding coastline, the journey to the top of the Calamorro Mountain takes around 15 minutes and is three kilometres.

Once you are at the top you can enjoy some of the beautiful installations of the restaurant or enjoy the bird of prey exhibition (eagles, hawks, owls and vultures).

For people who like the outdoors and nature there are also plenty of different routes of all levels for walkers and cyclists which includes a route which descents the Calamorro mountain.

*See the Cable car website for what times and what the prices are.

Selwo Marina is an animal park located just up from Paloma Park (which is owned by the same chain as Selwo Aventura in Estepona and Bioparc Fuengirola).

A highlight of the park has to be the Selwo Marina Dolphinarium, which is the only installation of this kind in Andalucia.

Apart from the dolphins the park also has penguins and parrots to name a few, the area is organised into three different areas.

*Visit Selwo Marina website to see when the park is open to the public and the prices of the entry fee.

Sea Life Benalmadena is an aquarium which is just before the marina of Benalmadena.

It was first opened in 1995 to protect sharks with over 5,000 different sea creatures.

The aquarium is divided up to 25 tanks and 9 halls, it showcases creatures from the Mediterranean, Atlantic, Tropical areas and the most representative species of the Amazon.

Sea life in Benalmadena is owned by group called Merlin Entertainment which has over 20 similar aquariums all over Europe.

*See the Sea Life Benalmadena website for more details about the prices and opening times.

The Marina area in Benalmadena has been awarded on numerous occasions the ‘Best Marina’ in the world; this means along with Puerto Banus and Estepona this is one of the most luxurious marinas in the area.

It has 961 moorings which also make it one of the largest on the Costa del Sol.

The Marina has a wide range of bars, restaurants and shops. Also in the area there are discos which surround the marina area for people looking to enjoy the nightlife of the area.

Food in Benalmadena tends to follow a Mediterranean diet and other typical Malaga cuisine.

In the coastal areas of the town there are lots of beach restaurants which offer lots of typical Malaga dishes.

These include dishes of fresh fish including Espeto de Sardinas, Calamares, Boquerones to name a few.