Amazing beaches in the Coasts of Malaga

Every year the weather and beaches on Costa del Sol attract thousands of tourists. The number of visitors increases the most in the summer months and mainly in the coastal towns like Fuengirola, Benalmadena and Marbella.

The beaches on the Costa del Sol have been awarded with a total of 22 blue flags. These flags are awarded for the overall quality, cleanness, conservation and facilities of the beaches.

The blue flag is presented by the European Union, guaranteeing high quality and at the same time offering a wide range of services and facilities, leisure ports and marinas, excellent restaurants and hotels. 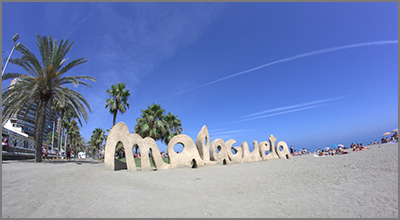 Malaga city has a total of 16 beaches which are of different varieties.

From the popular sandy beach in Malagueta near the marina and port area of the city, to the semi-urban beaches with dark sand, to the beaches in the western area which have small beach coves.

The Benalmadena coastline spans across almost 20 kilometres and has a total of 17 beaches (three of which have been awarded with an EU blue flag).

The beaches located on the western side of the town are rocky, insulated and tend to be quieter than the beaches on the east, where there are equipped with facilities and offer a range of water sports.

There is also one of the first nudist beaches in Spain, called Benalnatura. 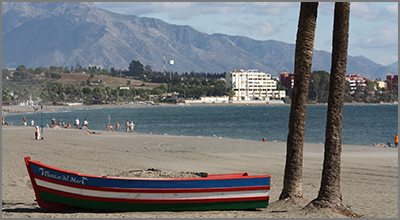 Estepona has ten beaches which cover a coastline area of around 21 km. Two of the beaches on the Estepona coastline fly an EU blue flag.

The beaches are varied from sand, dark sand and small beach coves.

There is Spain’s first ever nudist beach called Costa Natura.

The seven beaches on 8km coastline in Fuengirola tend to be low with calm waters. In 2009 Fuengirola became the only town in Spain which all the beaches had an EU blue flag.

The town offers one of the beaches (Los Boliches-Las Gaviotas) has been made accessible for the disabled.

The town of Marbella has 27km of coastline on which there is a total of 24 beaches of which 9 have been awarded with an EU blue flag.

The types of beaches reach from dark coloured sand, golden sand beaches and some with rough sand.

The marina of Marbella is located in the centre of these beaches where you can find a large number of water sports and activities to do in the area. 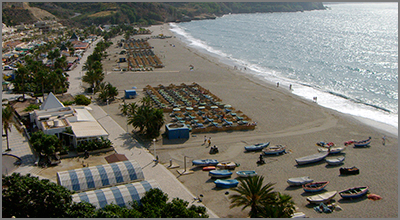 The beach area of Nerja spans over 14 km and has 12 beaches (two of which with blue flags).

The small beach coves are within walking distance and as they do not have the capacity to fit many people they are normally quite tranquil.

As well as being a popular tourist destination the beaches in Nerja offer all kinds of services and sport activities.

Tourists from all over the world visit the 7km of beaches in Torremolinos. The main beaches in the area are: Los Alamos, Playamar, El Bajondillo and La Carihuela.

La Carihuela beach is around two kilometres long and is an old fishing district, which has beach restaurants (Chiringuitos) which specialise in fried fish and other typical dishes of the province.

Rincon de la Victoria has a total of four beaches. The beaches in the area tend to be either dark sand or gravel. One of which has been awarded with an EU blue flag.

The beaches in this area have a high occupancy rate in the summer months.