Visit this calm town of Malaga 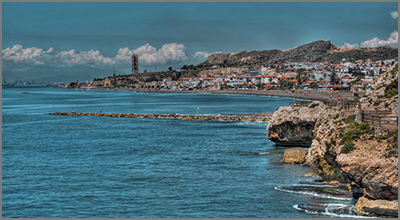 In the ‘Cueva del Tesoro’ (Treasure Cave) archaeological remains suggest that Rincon de la Victoria has been a settlement for tribes since remote times.

From 50BC it is know that the Phoenicians settled on the Benagalbón Hill.

Later was in the period when the Romans constructed a fortress town called Bezmiliana.

With the arrival of the Catholic Monarchs there was a continuous decline in the area until the 18th Century when King Carlos III builds the watchtowers and carries out the construction of the Fort Bezmiliana House.

The current name of Rincon de la Victoria is given by the installation on their land of the Order of Minims and convent of Victoria.

Things to do and see in Rincon de la Victoria

The ‘Cueva del Tesoro’ is one of the only three submarine caves of origin are known in the world and the only one in Europe.

Archaeological remains have been found in the cave (animal paintings and pottery) which date the cave to the Neolithic flint period.

This fortress was built in 1766 by King Carlos III with the goal to fight against the Dutch and English pirates which were very active in the area during this period.

The museum is unique on the whole of the Mediterranean coast, with grounds that cover an area of 90,000m2.

The park has a wide variety of native flora and the exhibition includes paths made out of natural, which is designed to the least possible impact to the surrounding environment.

Vistors can also enjoy a full scale replica of the ‘Cueva de La Victoria’ where cave painting were found, there are also information panels which explain the flora and the caves in the enclosure.

There is a total of four beaches which cover the 6,7km of coastline in Rincon de la Victoria.

One of the four beaches has been awarded an EU Blue Flag.

The typical cuisine in Rincon de la Victoria is made up of the dishes of fresh fish.

You can enjoy ‘boquerón victoriano’ (local whitebait) or sardines with zoque (a traditional type of Gazpacho).

Other typical dishes in the Rincon de la Victoria area are ‘maimones’ (soup made up from bread, tomato, oil, garlic and mussels), fennel stew.

Also worth a mention are the fruits like fig, pear, moscatel grape, fig, avocado, mango, etc...