Ronda, a place full of history 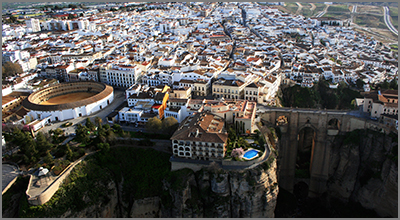 Ronda is located in the north-east area of Malaga and is the second most populated areas of inland Malaga after Antequera.

The town has its origin in the Roman Arunda which was built from the existing Iberic settlements. The Visigoths settled in the town until the arrival the Moors which gave the town the role of regional head and urban entity.

Ronda is situated less than an hour's drive from Malaga and is accessible by bus or car.

We recommend hiring a car from Malaga airport to visit Ronda and to explore what the province of Malaga has to offer.

Monuments and places to see and visit around Ronda

The ‘new’ bridge is one of the most recognised monuments of the whole of Malaga Province.

It bridge was built between 1759 and 1793; the structure joins the historic part of the town with the modern area.

The origins of this ‘old’ bridge is said to be Roman which was rebuilt by the Moors, however some say the origin is Arabic and built in the 18th century.

King Felipe II ordered this ring to be made due to the necessity of the Royal Calvary needing an area to keep their horses in 1572.

Then like most places in Spain in the middle ages the sport of bullfighting was brought to the ring.

However the current structure of the bullring was officially inaugurated in 1785 and has a diameter of 66 metres.

The Ascari Race circuit at the resort is the longest race circuit in Spain (5425 metres).

The resort is designed for people who love the motoring world. Installations at the circuit include the high speed circuit, dirt track, driving school, a clubhouse, heliport, bar and pool.

The Race Resort is situated around 10 km away from Ronda.

The Arab baths were built in the 13th century and are one of the best preserved in the whole of Spain.

The baths were build close to the Culebras stream where this made it a perfect place for a waterwheel (which is conserved today) to channel the water to the baths.

One of the goals of the Bullfighting museum is to provide its visitors with simple and clear information on the Royal Cavalry of Ronda.

The Bullfighting Museum, beneath the shaded area of the bullring, gives visitors a chronological journey around the fundamental aspects the town of Ronda, the relationship with the Royal Cavalry and the tradition of bullfighting.

The museum is located in the historic part of Ronda in a 18th century building, there is an exhibition on wildlife hunting and animal from other continents.

There is a hunting store at the museum and it also offers a service which organises hunts.

You can read about more museums and monuments in Malaga province in our museum guide and monument guide.