Torremolinos: One of the most famous resorts 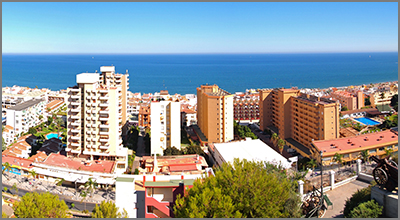 Torremolinos is one of the Costa del Sol's most famous resorts. In the 70s tourism ‘boomed’ in the area with lots of international celebrities coming to Torremolinos on holidays.

Some of the famous faces included Marlon Brando in 1957, Frank Sinatra in 1964, Bobby Moore in 1966 (who then a month later went on to captain the England football to victory in the 1966 World Cup) to name a few.

Nowadays Torremolinos is still a popular destination for tourists visiting the Costa del Sol along with Fuengirola, Benalmadena and Marbella.

The Congress centre in Torremolinos was built in 1967.

The centre opened in the 70s and is an ideal location for all types of celebrations and acts. It has 20 rooms and an exhibition hall of 6.000m2.

It is situated just 3km away from Malaga Airport.

The building was constructed in 1935 which according to architects project the structure follows progressive ideas which reined during the Second Republic in Spain.

The building was originally used as an orphanage and was declared a building of cultural interest in 1990.

The Battery Park located in the Montemar area of Torremolinos, the park covers an area of 74.000 m2.

In the middle of the park there is artificial lake of 9.000m2 where it is possible to rent a rowing boat for ½ hour.

There are four preserved cannons and two underground bunkers at the park from the days when these were used to defend the area.

The park also has a lookout tower which is 14,7 metres tall which has a panoramic view of Torremolinos and the surrounding coastline.

Things to do and places to see in Torremolinos

The Crocodile park in Torremolinos is open every day to the public and has over 200 crocodiles. It is home to the largest crocodile in Europe known as ‘Big Daddy’.

The park also offers every two hours demonstrations with the animals. It is well worth a visit if you wish to learn more about these incredible reptiles.

If you wish to see more crocodiles or other animals you can visit Bioparc Fuengirola or Selwo Aventura in Estepona.

Aqualand is located in ten minutes away from the centre of Torremolinos and is bigger than the water park which is in Fuengirola.

The park has the tallest Kamikaze ride in Europe (22m) and a variety of water slides, children’s area and jacuzzis.

You can find out more about prices and what days the park is open on the Aqualand Torremolinos Website.

The sports centre in Torremolinos is definitely a place to visit if you love sports. It has a wide range of installations including: four paddle courts, four tennis courts, indoor swimming pools, athletic tracks … etc.

Many elite athletes have used the installations over the years to train for international and national competitions.

If you want to find out more about what other sports you can do in Malaga, you can visit our guide to sports in Malaga.

Torremolinos in total has around seven kilometres of coastline; the main beaches in the area are called: Los Alamos, Playamar, El Bajondillo, La Carihuela, Montemar and El Saltillo.

In the summer months there a lot of chill-out bars and discos on the beach in Los Alamos which offers visitors a great place to enjoy the nightlife of Torremolinos and Malaga.

There are plenty of beach restaurants in Torremolinos which offer a wide variety of both international and national cuisine.

Some of the typical dishes of the town include: Roast Pepper Salad, Espeto de Sardinas, Gazpacho, Fried Fish and Salt baked fish.