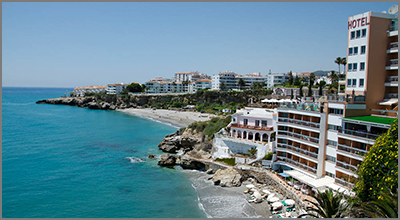 Nerja was also called Narixa or Narija by the Moors and the town is set in a beautiful natural setting near the Sierra Almijara mountains.

Excavations in the famous caves in Nerja date them back to over 30,000 years ago. Together with the equally famous ‘Balcon de Europa’ has made Nerja a popular tourist destination in the Axarquia region of Malaga province.

This tourist town was the scene of a TV series of the 80s, of the spanish "Verano Azul", which left the viewers attached to the TV to see each chapter.

Things to do and see around Nerja

Other than exploring these amazing caves there is also events held within the area.

Nerja has a vast expanse of beaches and coves, which are considered the best beaches in the province of Malaga (two of which have a blue EU flag).

Many of these coves are within the town of Nerja, including: Burriana Beach, Carabeo, Calahonda, Caletilla, etc...

But others have to travel a few kilometres but really worth it, Maro Beach, on Pine Cove, Canuelo beach, among other coastal areas.

You can hire a car from Malaga airport to explore Nerja and the surrounding towns of Axarquia.

The Balcon de Europa is in the centre of the town with impressive sea views; its name comes from when King Alfonso XII visited the area in 1885.

The ‘Eagle Viaduct’ is a civil structure built in the 19th Century to transport water to the old Sugar factory in Maro.

It is made up with four different levels of arches.

Typical dishes of the Nerja area

The cuisine in Nerja is typically one which follows the Mediterranean Diet.

There are lots of beach restaurants in the area which offer different dishes of fresh fish.