Sohail Castle is worth a visit 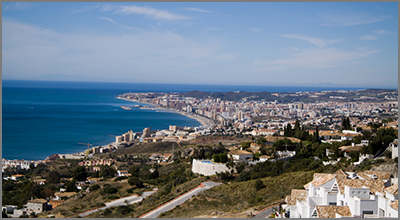 Fuengirola is an important tourist destination with around 250.000 people during the summer months whose revolves around this sector.

Other important tourist destinations on the Costa del Sol include: Torremolinos, Benalmadena and Marbella.

Fuengirola has one of the most famous markets of the Costa del Sol; the market is held at the fairground on Tuesday and Saturdays here you will find all kinds of second hand items.

There is a train station in Fuengirola which can take people both to and from Malaga airport; however this line is limited so it is recommended that you consider hiring a car at Malaga airport.

The first settlers in the town were the Phoenicians, however over the years Fuengirola has had the presence of Romans, Byzantines, Visigoths and Moors, all before it joined the Castile kingdom in 1485.

The castle has its origins in 956 when the caliph Abderramán III of Cordoba ordered a fortress to be built on top of the ruins of a small Greek-Latin settlement.

The purpose of this fortress is believed have been to defend the coasts.

The harbour in Fuengirola is used for both fishing and sports purposes. It has a capacity for 226 vessels. It is located around 20km away from Malaga airport.

The town hall in Fuengirola decided a monument to the old Spanish currency which was used in Spain before the Euro.

The monument was revealed in 2002 and is on the seafront.

The mayoress of Fuengirola, Esperanza Oña, revealed the full sized monument dedicated to the Seat 600 in 2008.

The metalic statue is on top of a roundabout in the Los Boliches part of Fuengirola.

It was said the time of revealing the car “is linked to those first steps tour of the city and the start of prosperity in the town”.

Bioparc Fuengirola is becoming known as one of the best Zoos in the world.

National Geographic magazine have featured the Zoo on numerous occasions. Some of the species at the park include Ring-Tailed Lemurs, Nile Crocodiles and Meer cats.

Along with the Waterpark in Torremolinos (which is the oldest on the Costa del Sol) Mijas-Costa has its own waterpark which has wave pools, childrens pools, and all different kinds of rides including the ‘Kamikaze’, the ‘Bravo River’ or the maze of slides.

The seven beaches on 8km coastline in Fuengirola tend to be low with calm waters.

Fuengirola has a lot of beach bars which offer a wide range of typical dishes of Malaga and the Mediterranean diet.

There are also plenty of restaurants which offer a more international cuisine.