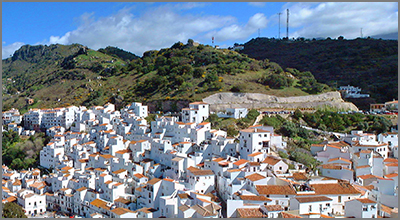 Casares is a white village located in the western part of the Costa del Sol.

It is situated to the south of Manilva and Estepona.

It is typical white Andalusian village, with narrow steep and winding streets and whitewashed houses.

Blas Infante who was an Andalucista politician, writer, historian and musicologist, known as the father of Andalusian nationalism (Padre de la Patria Andaluza) was born in Casares in 1885.

There are reminders of when the Moors and Romans influenced the town which include the remains of the Castle at the top level of the town.

There are also La Hedionda Baths which Julius Caesar is said to have used its sulphurous waters to heal himself from liver disease.

This privilaged position means that Casares offers beautiful natural views, which can be best seen from Los Reales.

In the Alechipe farmhouse, there are three reasons with inscriptions, which falls within the city of Lacipo, one of the most important of Málaga.

Things to do and see in Casares

As well as enjoying a walk around the streets of this typical white Andalucian village there is located on a steep limestone cliff, and on top of the town, is Casares Castle.

The population of the town is spread out across the old fortress walls and the nearby hills.

On the eastern slope is also the Ancient Church of Encarnación which was built in the late 16th century. The town is one of the most picturesque of the area.

Besides remains of a fortress wall, there are also preserved some of the walls and towers of the Palace, which located in the highest part of the plateau.

With respect to the entrance doors on the sidewall is the only gateway to the fort, known as "Arco de la Villa". It opens into a square tower, forming a layered passage, which currently houses the Museum of Ethnohistory.

Another door opens into the northern corner of the wall, with a door which leads to the suburbs, and is known as the "Arrabal’s Arch".

The cuisine in Casares in two different types: the gastronomy of the mountains and of the beach.

Typical dishes from the mountains include rich stews such as the ‘pringá’ which is a cooked meat broth with chickpeas and bacon.

You can also enjoy dishes like fried goat kid which is an animal that is raised in the area of Casares (sausages are also made out of this meat).

Casares is known for its fried fish, with a gazpacho salad or vegetables. The typical plate is of the so-called Barbary of sardines, which is sardines in a pickled spiced with lemon and paprika.

For sweet dishes, there are a couple of typical dishes to choose from, there is fried cakes, which are typical in autumn, or cupcakes which can be dizzled with honey or chocolate.