Visit the capital of Axarquia: Velez-Malaga 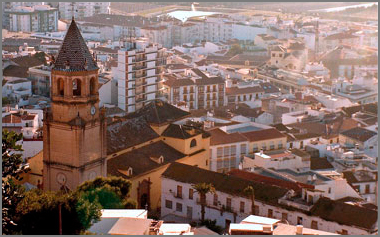 Velez-Malaga is the capital of the Axarquia region which is located to the east of Malaga. Tourism is the most important sector in the town, with Malaga airport just 48 kilometres away from the area.

This is followed by agriculture the town farms subtropical produce such as Avacados (Velez-Malaga is the largest producer in Spain), Mangos, Custard Apples... etc.

The fishing sector is also important in the Velez-Malaga area with La Caleta Marina having the biggest fishing fleet in Malaga province.

Although the first mention of the town is said to be linked to a Phoenician colony in 8th Century BC it wasn’t until the period of the Moors in Spain that Velez-Malaga was recognised of been a town of wealth and strategic value.

To explore the surrounding towns such as Rincon de la Victoria (23km away), 21km from Torrox and 27,5km away from the coastal town of Nerja we recommend hiring a car at Malaga airport.

Places to visit and things to do in Velez-Malaga

The Beniel Palace was built between 1610 and 1616, it was designed by Miguel Delgado (who also was teacher at the cathedral in Malaga).

It is one of the best examples in the city of architecture of the 17th century.

There are watchtowers which were used as a line of defence on the coast, today there is various tower still standing which are the following: Torre Gorda (Benajarafe), Torre de Chilches, Torre de Lagos, Torre Derecha and Manganeta and del Jaral (in Almayate).

The original structure of the building was built in the times of the Catholic Monarchs in 1480 where it was used as a military hospital until 1680, was where from then on it was order by some monks to be used as an old peoples home.

Velez-Malaga has 25 kilometres of coastline which is divided up into nine beaches, of which two have been presented with an EU Blue Flag.

Gastronomy in Velez-Malaga and the surrounding areas

Velez-Malaga and the surrounding areas have a varied cuisine in restaurants and Tapas bars; in fact, it is one of the attractions of these two municipalities. These are some of the typical dishes of the area:

A typical dish is during Easter Week is ‘Bacalao en salazon’ (salted cod).

Ajobacalao (Cod with garlic) like the previous dish it is typical during the period of Lent.

Other dishes: Fried fish, Soup cachorreña and grilled sardines. In confectionery: the tasty oil cakes and mostachones (a type of flattened cake).