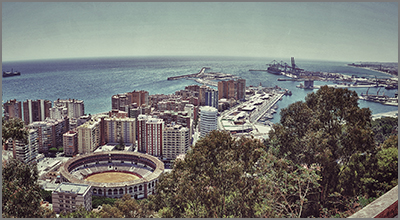 Malaga is the capital city of both the province and of the tourist destination of the Costa del Sol.

It is one of the oldest cities in Europe with the first settlers in the Malaga region being the Phoenicians in 8th Century BC.

The next arrival was the Roman then the Andalucian medina and a thriving capital four times their own kingdom, Malaga was placed into the Crown of Castilla and Aragon in 1487.

During the 19th century Malaga named the first industrial city in the whole Spain.

In the 60s and 70s the city along with other towns like Torremolinos suffered from a positive tourism boom.

The city is full of monuments and museums. Malaga airport is the busiest airport in the south in Spain.

To explore the province of Malaga you may need to consider hiring a car from Malaga airport.

The ancient Phoenician enclosure containing a lighthouse that gives name to the hill Gibralfaro (Jbel-Faro or Lighthouse hill).

The Fortress was built by the Arab King, Yusef I in 1340 it was built to house the troops and protect the Alcazaba in sieges, due to widespread use of the top of the hill by artillery.

La Alcazaba is an old military fortress which was built by the Moors in the 11th century.

Of the 15,000 square metres of indoor space are preserved today, 3,478 are of buildings that could qualify for civilian use, 3,516 is buildings which were used for military use and the rest not built area.

The origins of the Roman Theatre in Malaga date back to 1st Century BC in the Hispanic Roman times.

It built in the times of the Roman emperor Augustus and used until the 3rd Century.

The theatre was rediscovered in 1951 when during the construction of the gardens of what used to be the Casa de Cultura (Culture Centre).

Things to do and see in Malaga

The port and marina in Malaga has over the recent years has become important cruise terminal in the area, with visits from landmark ships like the Queen Mary II.

One of the Piers has now got a commercial centre which has lots of fashion brands, shops with bars and restaurants which both offer the local cuisine and an international cuisine.

The Conception Gardens originated thanks to the union of several properties which were located in the north of Malaga in 1855.

The gardens had back then olives, almonds, vines and some sources believe citrus plants.

The area was opened to the public for the first time in 1994.

The province of Malaga has a lot to offer for people who enjoy nature and parks, there is also a wide variety of outdoor sports in Malaga.

The English Cemetery is the oldest non-Roman Catholic cemetery in mainland Spain.

The Cemetery was built on a piece of land which was granted by the Governor of Malaga to the British Consul in 1831.

The entry is FREE however voluntary donations are welcome to help maintain the cemetery and its grounds.

*If you would like to find out more about what other monuments and museums are worth a visit in Malaga you can visit our Malaga Museum Guide and our Malaga Monument Guide.

Gastronomy and typical dishes of Malaga

The cuisine in Malaga tends to follow the Mediterranean diet with salads and plates of fresh fish.

In the beach area of Malaga you will find that the offer a wide variety in fried fish (which is usually fish covered in flour and then fried in olive oil) there is also the cooked sardines known as ‘Espetos’.