A guide to the monuments and things to do in Estepona 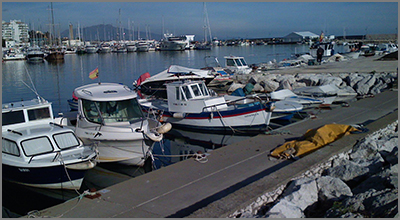 Estepona is located 82km from Malaga and is close to the town of Marbella. It has around 23 km of coastline has two beaches which have been awarded an EU Blue flags.

Flint tools and dolmens have been found along the Vaquero stream have proved that people have dwelled in Estepona since prehistoric times.

During the 15th to the 19th century Estepona barely registered an increase in population. Then in the last two centuries stabilises and begins to grow slowly until the late 20th century, since then the population has increased at an important and rapid rate.

The plaza where the tower is located is used nowadays used as an enclosure where the local band holds their concerts.

The origin of this church is legend. The legends says that in the 1400 there was a pine tree forest, the residents of Estepona, found a crucifix, which credited the first Christians who lived in the area while the Moors ruled the area.

The neighbours built a chapel in the place which the crucifix was found with the same trees which had to be moved to make space for the building. They called the chapel ‘El Cristo de la Veracruz’.

Years later in 1889 when the Remedios de la Plaza de Reloj Church was moved to this area the ruins of this church were found.

Playa de Cristo is a small beach located in a bay close to the port. Its waters are crystal clear, low level and are protected when the wind blows.

There is also two beach restaurants where you can try some of Malaga’s typical cuisine.

The bullring in Estepona was opened in 1972 and the lopsided designed was made by the architect, Juan Mora Urbano.

Selwo Aventura is theme park and Animal Park in Estepona, it has over 2000 of different species, the park is 100 hectares in size. Apart from the animals there are other activities such as zip lines and archery.

The park is part of the same company which own Selwo Marina in Benalmadena and Bioparc Fuengirola.

Estepona has six different golf courses which will suit players of all handicaps. These include Valle Romano Golf Resort and Atalaya golf & Country Club.

Also thanks to the facilities of the marina and yacht club, you can enjoy other water sports such as diving and sailing. Estepona also has plenty of trekking routes throughout the different areas of town.

Estepona has many bars and restaurants on the beachfront, here you can try typical Andalucian and Malaga dishes this is includes fish and seafood such as fried boquerones, octopus, ‘espetos’, ajoblanco and gazpacho.